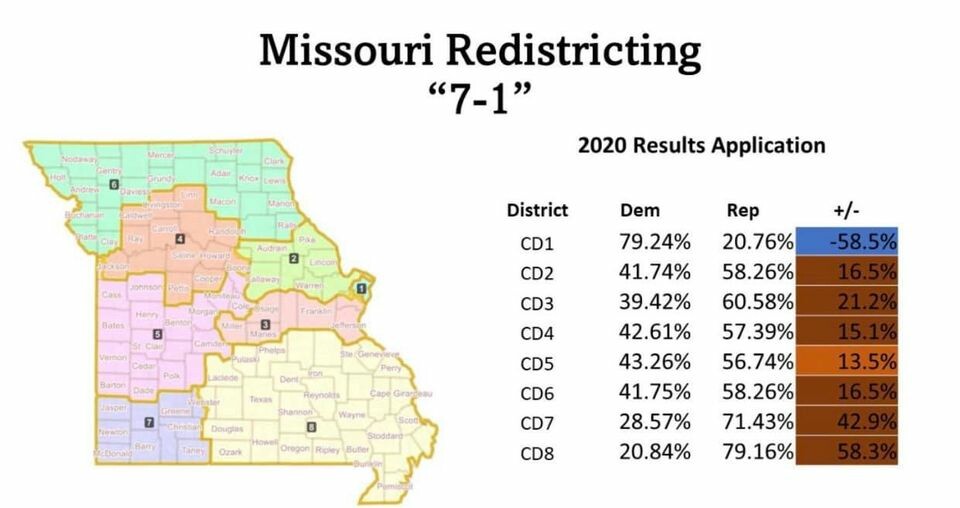 The Missouri filibuster continues over the US congressional redistricting process.
I think I'll start calling it The Freedom Filibuster!  It's been going on nearly a week now and our conservative senators have done an incredible job standing up for Missourian's ability to be represented well in D.C. and, therefore, protect the Republic from Pelosi and her swamp.
Some are wondering why in the world this is such a big deal.  It's just a map, right?  Wrong!
Given the state of our nation and the incredibly egregious and sweeping acts being taken by the liberal democrats in power, it is PRIORITY to protect our Republican seats and hold as many as is absolutely possible to keep Pelosi from ruling that roost any longer than absolutely necessary!
Can you imagine another 10 years with that lady and her crazy cohorts in charge!?
That means the map is of the utmost importance to the future of our nation.  The seats we hold are critical.  They ARE worth fighting for!

One particular senator has actually responded to many e-mails making the argument that dividing up a solid red district and pulling in blue territory would "dilute" the country folks' votes, because surely the city would overtake the country and turn it blue.  Her question was,  "How long before urban areas overwhelm the rural areas?"
Ok.  Now I get it that when you first read that, you think "Yeah!  I don't want a city (or a country) person representing me. We are very different and I need a country person like me in DC - not a democrat from over there in the city"
That's a very narrow way to look at it, in my personal opinion. Think a little bit deeper and a spend some time considering what she's actually saying here.   Let's take a closer look.
The district in question, is District 5 which currently belongs to Emmanuel Cleaver.  You can see a possible 7-1 map above.
Missourians are smart enough to know that one more democrat in DC right now supporting Pelosi is a BAD idea for everyone!  If we can keep a red seat - do. it.
I believe our rural conservatives want to save the Republic as we have known it & that they'd do about anything to ensure that happens.
2.   If a portion of an urban district is added to several counties that have a combined 10 point republican lead, it is going to take ALOT of democrat population growth to "overwhelm" that republican majority.  ALOT.  It would be highly unlikely, if not impossible.  It's definitely improbable.  They are not adding territory in urban areas to districts with narrow margins.  Our conservative senators are smarter than that.
3.  The population of those urban areas are being vacated by republicans who love liberty.  Many of our liberty loving city voters are fleeing to the counties where they can enjoy more liberty and they don't have to deal with crazy mandates & tyrannical schools.  The truth, in both Kansas City and St. Louis, is that although the population of more liberal citizens is growing in certain areas they are also losing large pockets of people who are sick and tired of tyranny & overreaching government.  For that reason, population is also growing in the counties.  This means that it would take an even larger amount of democrat population growth to "overwhelm" the surrounding counties in the district.
4.  The map being proposed now in Bernskoetter's bill, the map that passed through the House in HB2117, has exactly the same issue so please don't believe this argument.  They know you don't know, so they give you this argument knowing you won't like it when the truth is the same can be said of the HB2117 map which our conservatives believe is a 5-3.

the pelosi map the moderates are pushing

Here's what it looks like.
Take a look at District 3 that includes tiny parts of St. Charles county, all the way to the Mississippi River and also reaches all the way across central Missouri to include Camden County and everything in between.  It literally circles St. Louis with TWO tiny districts in the city that would be democrat.  Now, in THIS map you can be assured that Districts 1, 2 and 5 would all be blue.  This map is nothing but a 5-3 and it's as obvious as the sky is blue. 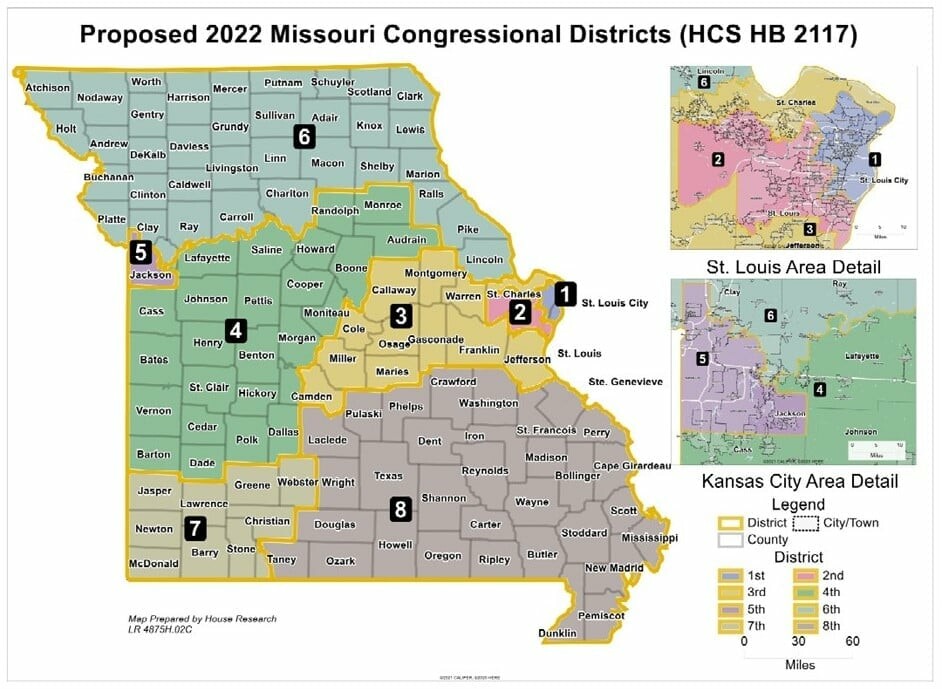 Compare this map to the 7-1 pictured above.  Which looks more gerrymandered to you?
Which district do you think is going to be more easily pushed to purple then blue?
This isn't rocket science and you don't have to be a map expert to see this map is a load of crap.
District 3 on BOTH maps is the only one you could call "gerrymandered" at all and it's WORSE on the one they are wanting to pass!!   No wonder the democrats want this one!
In her email response to concerned citizens, she is basically accusing the conservatives of gerrymandering and diluting the republican voters when the map she wants is MUCH WORSE!

the only important questions

If you don't want 3 democrats from Missouri going to DC, you'd better get on the phone and call the Republicans who are ramming this down our throats.  It's the MODERATES who are duping you!
HB 349 - School Choice in Missouri

Liberty Limelight Awards & Other Kudos for the House Rules