Liberty Limelight Awards & Other Kudos for the House Rules

I'm still shaking my head over the House floor debate on HR 11, the Rules of the House.  If you haven't been keeping up with this topic please go back and read my first article on the topic.
I'm not sure what descriptive terms would fit best for the way I feel about how this process unfolded.
Disappointed.
Disgusted.
Downright angry.
These are among my top picks.

On Wednesday during debate on the floor, Representative Peter Meredith (D), whom I have never found myself in agreement with, spoke my favorite words of the day in his opening speech for an amendment he was offering.   I hope you'll take time to watch.  I concur with his sentiments 100% and I'm thankful he had the nerve to stand and put them on the record.
It's amazing that every democrat seems to understand how the Rules and the consolidated power impact their ability to move legislation.  The republicans, however, will discuss the power of the Speaker behind closed doors in agreement and yet they are filled with fear that disables them to take any action and make changes.  And make no mistake - they do have the power to change it and change it they must if we want to see a legislature that truly represents the citizens of Missouri.
Please listen to Rep Meredith speak the truth.
The House Rules breed corruption.  It's been going on FAR too long and it does not have to be this way.  Our Founders never intended for our legislature to function as it does today.  Rep Meredith and his democrat colleagues understand that.

republicans resolved to support the speaker regardless

It's not surprising that HR 11 passed.  What was surprising was the COMPLETE lack of willingness to listen and consider the common sense amendments that the democrats and Rep. Mazzie Boyd were offering up.  We saw this in the committee hearing as well.  I'm ashamed to say that the Republicans just refused to even consider anything at all that was offered up by a democrat EVEN THOUGH it would have benefited the PEOPLE of Missouri.
For quite some time in the committee hearing, the Republicans sat silent - unwilling to even comment.  The Chair would ask for discussion and..... crickets.  No discussion was had until Rep Barry Hovis finally felt bad enough that he started trying to explain his opposition with every. single. amendment offered.  Although he always opposed their offerings, at least he engaged in respectful conversation.

prioritize missouri citizens?  sorry, but no.

Every vote in committee & on the House floor was completely divided by party lines.  Not one Republican even voted for the amendment that would have required committees to hear Missouri resident's testimony BEFORE testimony from out-of-state witnesses!
NOT. ONE. Republican prioritized Missouri citizens over out-of-state witnesses!  That particular amendment was offered by Rep Strickler (D), HA 6.
I was completely dumbfounded & so angry I could hardly breathe.  Tell me...what MISSOURI legislator would not prioritize MISSOURIANS in a public hearing!?

but there was one...we hope she inspires the rest

There was only one Republican who offered up an amendment during floor debate that would be a step toward forcing the Speaker to share some power.
We love that freshmen Rep Mazzie Boyd had the courage to stand and file her amendment even though the entire party stood against her.  That girl has got more cajones that 99% of the men in that chamber.
Not that we should be surprised.  This 24 year old firecracker whose college graduation photo can still be found on her FaceBook page along with photos from her time spent working in Trump's Whitehouse, ran a race against a much older male incumbent and she won!
It's interesting to hear the comments on her amendment.  Majority Floor Leader, Jon Patterson (R), actually explains one way the Speaker holds power through his ability to remove reps from committees or just form new committees altogether when things aren't going his way.   Rep Tony Levasco (R) is usually a liberty loving guy but you'll hear in his comments even further evidence of the problems in the Rules of the House although he's speaking against Rep. Boyd's amendment, he actually proves again that the rules do need to change.  And of course, Rep. Meredith speaks again in support sharing more truth.

In honor of their bravery & courage in using their voices to stand for liberty and better representation of all Missourians on the House Floor, we are bestowing the first ever Liberty Limelight Awards on Representatives Peter Meredith & Mazzie Boyd. 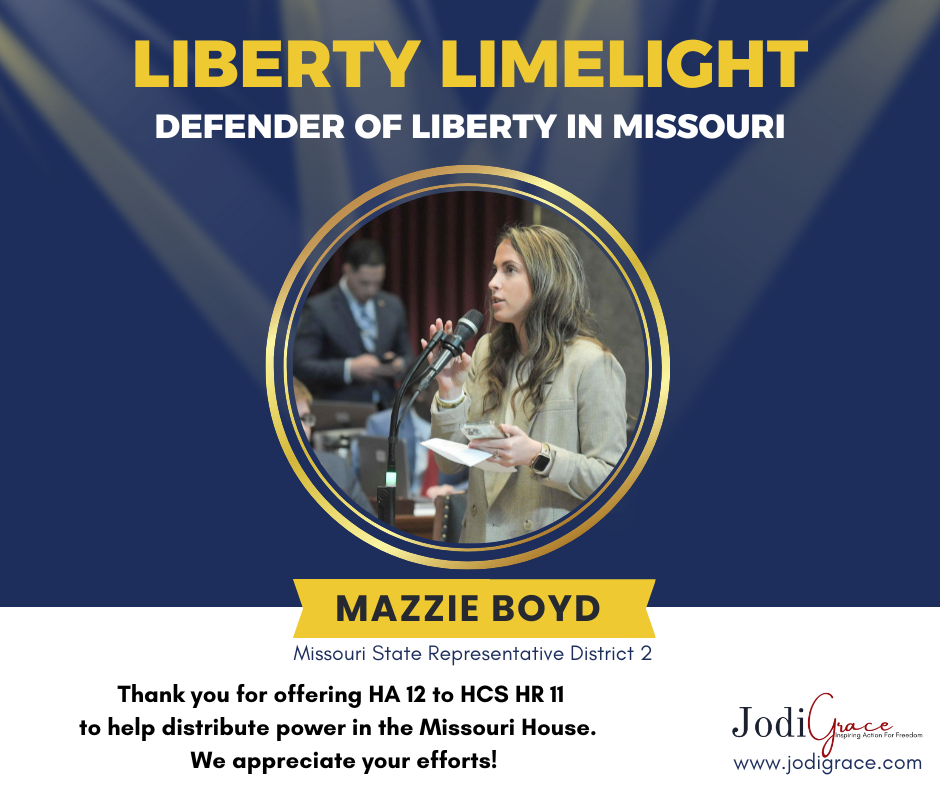 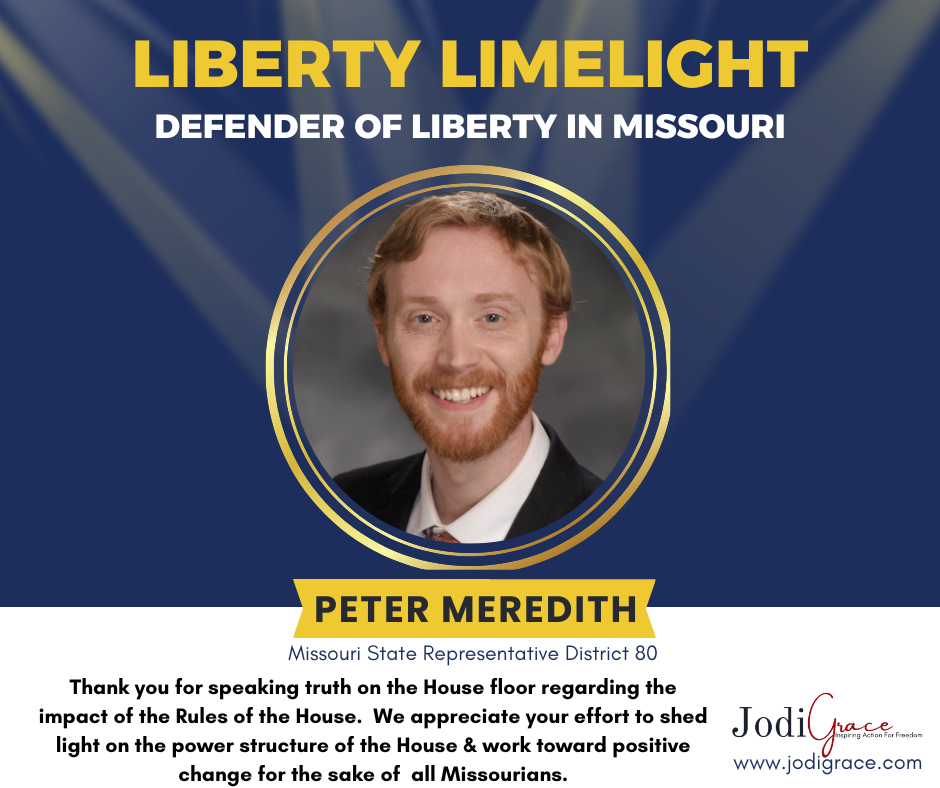 Thank you, Representatives, for doing your jobs with diligence and intentionally standing strong for the PEOPLE of Missouri!!  We appreciate your strength and commitment to liberty!

kudos for standing strong with your votes

Other reps who didn't just go along to get along with their votes on the final passage of HR 11 were Rep Chris Sander, Rep Cheri Toalson Reisch and Rep Herman Morse along the entire Democrat Caucus. 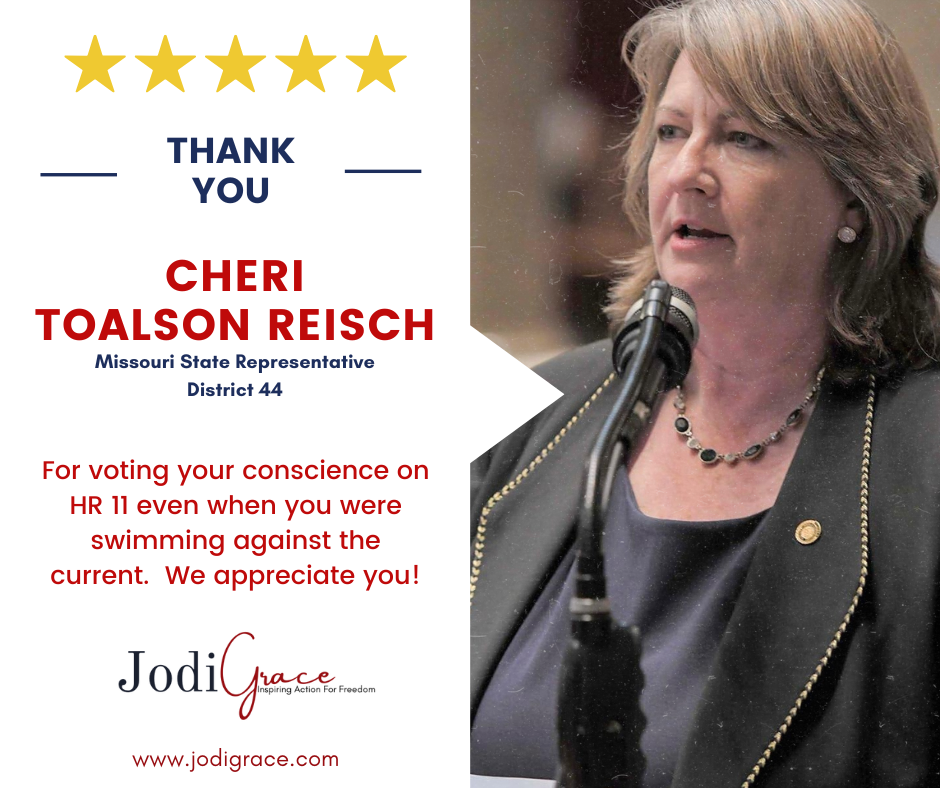 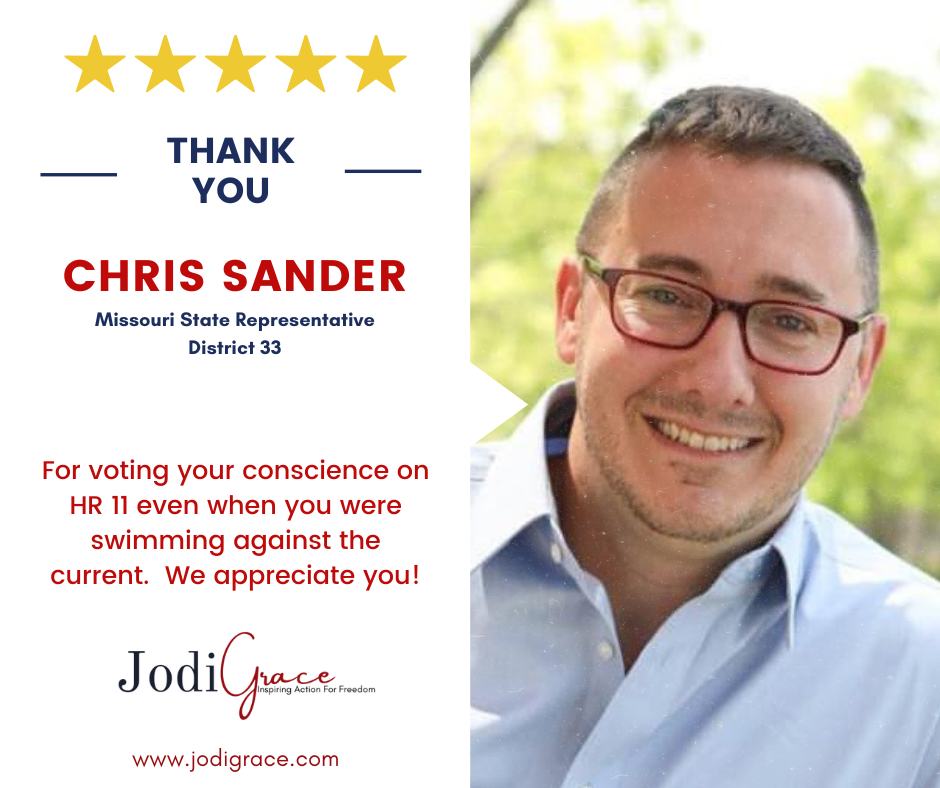 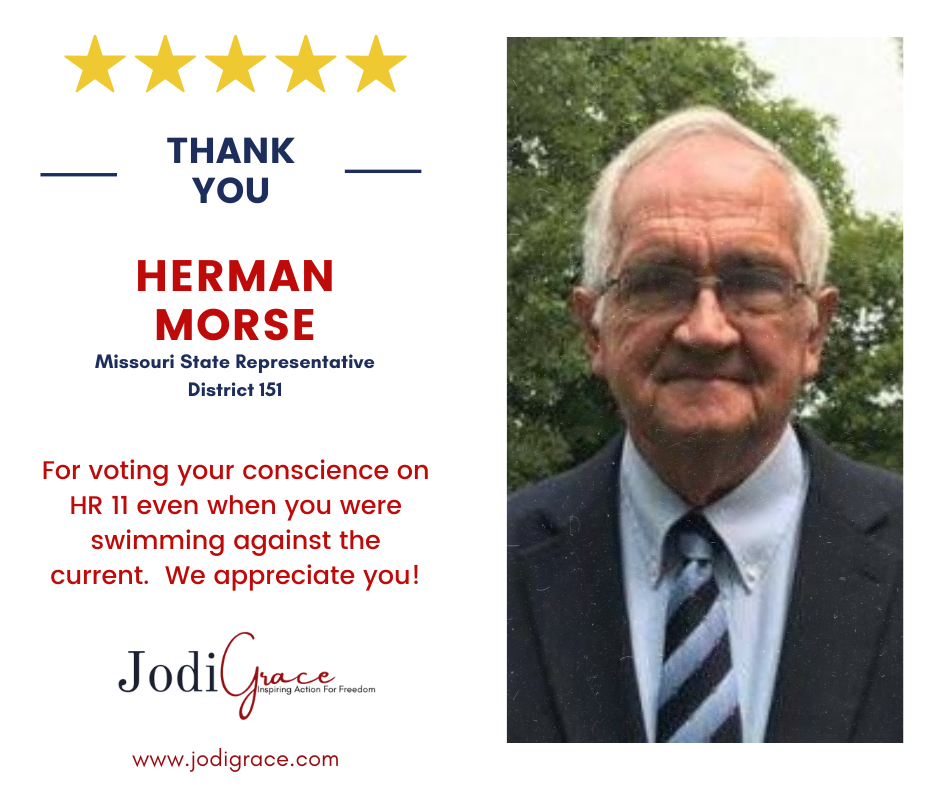 Please reach out to your own representative and express your feelings on their vote on HR 11.  HR 11 Rollcall.pdf
We are hopeful that with more education and as Missouri citizens continue to participate and use their voices, we'll see more improvement on this issue in the future.
Preserving our liberty and keeping our Republic is paramount and a constant battle to be fought.  I'm committed to the fight for the sake of my children and future generations.... and hope you'll join me!